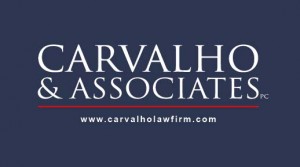 Carvalho & Associates, P.C. was founded in 2004 by Attorney Michael P. Carvalho. Mr. Carvalho has over 20 years legal experience and is licensed to practice law in Georgia, Massachusetts, Michigan and the District of Columbia. We have satellite offices located in Boston, Detroit and Washington, D.C.

Mr. Carvalho grew up in Massachusetts and received his B.A. from the University of Massachusetts, Amherst with a concentration in Environmental Science and Policy. From 1986 through 1994, he worked as an environmentant consultant for a national environmental consulting firm, and later served as President and CEO of Site Assessment Specialists, Inc., a company he founded, providing assessment, and CERCLA/SARA litigation support services for cost allocation and cost recovery matters, environmental risk management and remediation services. His environmental consulting clients included Waste Management, Inc., and General Motors Corporation, in addition to various regional and national lenders.

Mr. Carvalho attended law school (nights) and received his Juris Doctor from Michigan State University Law School in 1994. Later that year, he sold his company to a publicly held firm and entered the full-time practice of law. He has since served as in-house environmental counsel to First Chicago-NBD Bank (now J.P. Morgan Chase) and General Motors Corporation prior to relocating to Washington D.C. While in Washington, D.C., Mr. Carvalho was a partner with the firm of O’Connor & Hannan, LLP where he represented clients in energy and environmental transactional matters throughout the United States, Puerto Rico, Canada, Caribbean, Mexico, France, and Brazil.

Since 2004, Carvalho & Associates has represented a broad range of clients in Environmental, Energy and Land Use matters. The Firm regularly advises clients on complex regulatory issues and regulatory matters. When necessary, we litigate our clients claims where we have accumulated an impressive level of success in the courtroom:

Mr. Carvalho is also a member of the Essex County Bar Association, Georgia Trial Lawyers Association, Cobb County Trial Lawyers, Environmental Section of the State Bar of Georgia, where he has presented several papers on state and federal environmental regulation, litigation and related matters. He regularly represents clients in mediation and arbitration matters. Mr. Carvalho is an active member of the National Brownfields Association.

Mr. Carvalho’s was recently appointed to the National Board of Directors of the EnvironMentors Project of the National Council for Science and Environment (NCSE). He has actively been involved with Environmentors for over 15 years.